Since 1986 a local group known as the AHM Substance Abuse and Violence Prevention Task Force have worked together to minimize the impact of drug and alcohol use and abuse in the regional community.  Today our efforts are increased to incorporate community wellness with an emphasis on helping to keep youth drug free.  Our former task force is now called the Coalition for a Healthy Empowered Community, or CHEC.

Through the efforts of the CHEC Coalition, AHM was awarded a federal grant, one of fewer than 200 nationwide communities to help combat local underage drinking, prescription drug abuse and the prevention of marijuana use.  The grant award, which is for five consecutive years, is funded through the Office of National Drug Control Policy and the Drug Free Communities Support Program.

Join us for a free virtual Opiod Abuse Prevention Presentation on Monday, August 24th from 6-7:30pm. This engaging presentation will be facilitated by Rob Picone; Pharmacist, CHEC member, and President-elect of the Connecticut Pharmacist Association. In this presentation, the topics below will be discussed, and there will be breakout groups. There will be time for questions at the end.

Contact Brendan Grimm to register! Zoom link will be provided upon registration. 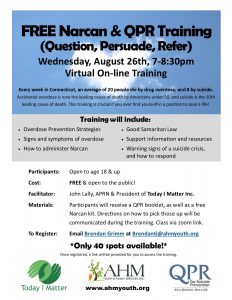 Since 1986 a local group known as the AHM Substance Abuse and Violence Prevention Task Force have worked together to minimize the impact of drug and alcohol use and abuse in the regional community.  Today our efforts are increased to incorporate community wellness with an emphasis on helping to keep youth drug free.

The parent organization of this group, AHM Youth and Family Services was awarded a federal grant, one of fewer than 200 nationwide communities to help combat local underage drinking, prescription drug abuse and the prevention of marijuana use.  The grant award, which is for five consecutive years, is funded through the Office of National Drug Control Policy and the Drug Free Communities Support Program.

The name CHEC came about through the collaborative efforts of members that serve on this community coalition.  The idea of the name change came about after many parents in the communities expressed ideas on ways to expand membership and support for AHM’s efforts to help keep children and teens drug free.  Throughout the second year of this grant, the coalition will be present at an ever increasing number of community events such as school open houses, farmers markets, town wide celebrations, and youth sporting events.  The idea is to help reach a new generation of families living in the regional community to share important wellness resources on parenting and health related topics.

CHEC, in collaboration with a recently formed RHAM High School Youth Group called RALLY, will work together with the goal of reducing substance use among youth.  Throughout the year the CHEC Coalition will sponsor parent and youth education forums, social marketing campaigns and community wide events such as the prescription drug TAKE BACK program.

For more information about the CHEC Coalition and the way to get involved, please contact the CHEC Project Coordinator, Brendan Grimm at BrendanG@ahmyouth.org. 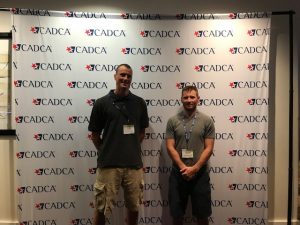 AHM Prevention Coordinator Brendan Grimm (right) and RHAM Health teacher Christopher Mader at the bi-annual CADCA conference (Community Anti-Drug Coalitions of America) in Atlanta, GA.  Hundreds of coalitions from every state in the country attend the 4 day national conference, all with the goal of drug prevention and keeping their communities safe!

Each year AHM does marketing campaigns for the Social Host law in Connecticut, which holds adults liable for allowing minors to drink alcohol on their property. The States Attorneys office puts it very clearly as he tells us “Taking the minors keys is not enough. There needs to be a reasonable effort to make sure they are not drinking in the home”.

Connecticut is one of the states in the country that has what is called a Social Host Law. This law states that it is illegal for an adult to permit a minor in Connecticut to possess liquor in a dwelling or on private property. This holiday season, AHM Youth and Family Services is trying to help inform parents of the consequences of this law in an effort to keep local teens safe.

According to AHM’s Drug and Alcohol Prevention Coordinator, Brendan Grimm: “local parents play a major role in their sons and daughters choices about alcohol, tobacco and other drugs.” In an April 2018 survey of teens, administered every 2 years at RHAM, teens expressed their perception that alcohol is easy to access. The survey also showed that only 74% of teens perceive alcohol as a risky behavior. Furthermore, the AHM community survey, which was also administered this past spring, revealed valuable information about alcohol. It showed the importance of the messages that parents give to their children. The data showed that when parents attitudes and rules are such that alcohol is risky for youth, it resulted in reported decrease in alcohol use. However, parents who reported to be neutral about the topic with their teen, or those who give the message that it is not harmful, resulted in increased reported use.

Here are a few FACTs for parents to consider about underage drinking in Connecticut:

* Youth under age 21 who are caught with possession of alcohol can also face motor vehicle sanctions, including the suspension of the minor’s operator’s license or a delay in their ability to obtain a license.

* Simply taking away the car keys does not solve all of the problems related to underage drinking. Take away the liquor, calling the parents of the offending minor, and getting help from the police is one of the most effective ways to ensure a teen’s safety if they have been drinking.

* There can also be civil and criminal consequences for adults that serve alcohol to minors.

* Parents can proactively take measures to help ensure these special times for teens are fun, yet safe and drug-free. For additional information, including the full list of parent tips and ideas, visit www.DrugFreeActionAlliance.org

* AHM is just a phone call away. If parents would like more information on ways to speak with teens about drugs and alcohol, there are resources available for you by calling 860-228-9488.

Throughout the school year, the AHM CHEC Coalition has a program called Parent Talks. These are periodic gatherings that bring parents together from the neighboring AHM communities to talk about topics such as underage drinking, and helping teens cope with other risks that exist in the world today facing young people. For more information, contact Brendan Grimm at the AHM offices by calling 860-228-9488.

Anyone is welcome to join the AHM CHEC Coalition, which meets on the first Wednesday of every month starting at 4 PM at the AHM offices on Pendleton Drive in Hebron.

Please take a look at our links below.  For more information on RALLY and the CHEC, or to get involved, contact our Project Coordinator, Brendan Grimm, at BrendanG@ahmyouth.org. 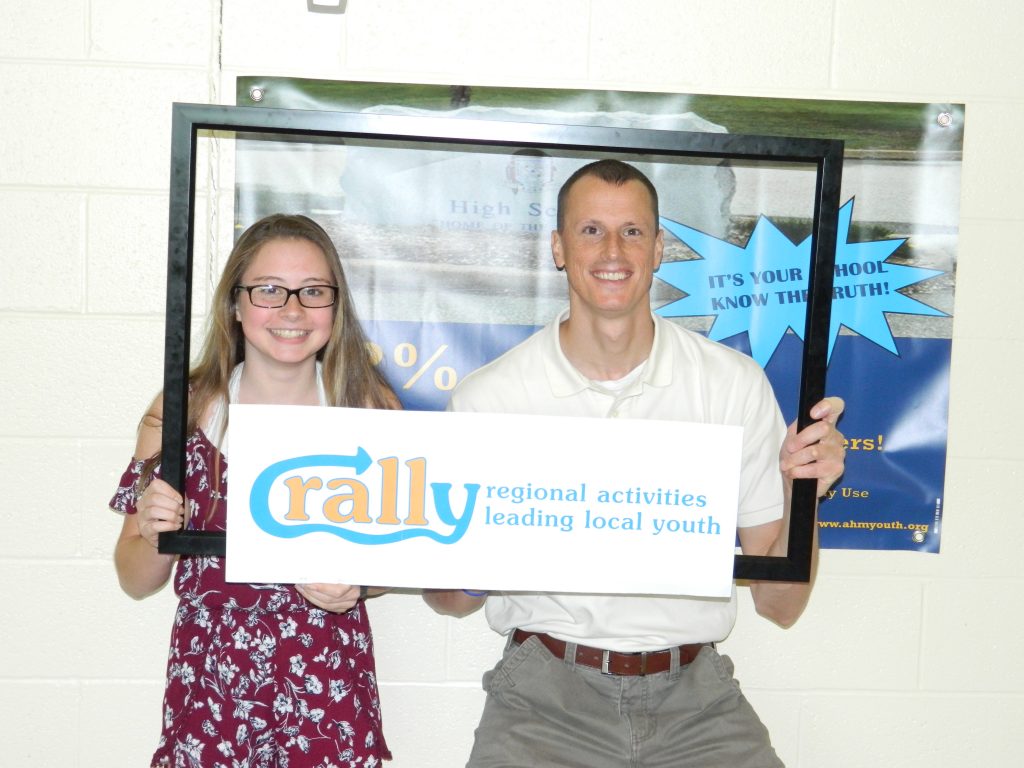 RALLY (Regional Activities Leading Local Youth) is a group of 25 members who meet throughout the year to plan and implement various campaigns in the school and community to prevent substance use. One of the major campaigns is always the Social Norming campaigns, which aim to correct misperceptions about substance use. The group also creates social marketing campaigns to educate students on the harms of drug use, and the consequences.

Each year, there are two National Takeback events. AHM sponsors these both, in partnership with the Regional School district. This program allows the community to dispense of any unused and unneeded medications, safely. Each event, takes in approximately 150 pounds of medication, which means they are out of the community, and cannot contribute to abuse, and the opioid epidemic.

AHM partners with RHAM High School to bring in expert speakers on substance use, addiction, and adolescent behavior. These events happen 3 times each year, prior to the sports season starting. It is a required event for the student athlete, and a parent.

Each year AHM partners with State Troop K to sponsor patrols at the Hebron Lions Fair. This strategy helps keep the community fair a safe event, and over time will contribute to a decrease in substance use, as consequences for those offenses occur.

Every other year, AHM sponsors a training for safe serving of alcohol. This event is free for all servers at restaurants and bars in the 3 communities. This program helps ensure we have reliable, trained personnel at our local establishments and know how to keep consumers safe.

Each year AHM also facilitates community talks with various speakers, and experts, addressing relevant issues. In the past events have been done on marijuana education, opioid epidemic education, and Alcohol. Coming up in October, there will be a Community Town Hall event on Underage Drinking, with Dr. Alicia Farrell. Further, AHM coordinates with RHAM, motivational speakers for the different grades at the school. In the past couple years, ex- NBA player Chris Herren, as well as the program called Sarah’s Journey came to speak to the students about their decisions, and how they led to negative consequences.

Through a partnership with the Jordan Porco Foundation (JPF), AHM clinical staff members will be introducing the 4 What’s Next program to high school students. 4 What’s Next is a program that builds psychological resiliency in high school students by giving them the tools to handle stress and distress now and in their future. The core of the program is the 4 What’s Next Framework, which teaches students how to effectively handle distress by “reaching in” and utilizing independent coping strategies, “reaching out” by seeking and accepting help outside of themselves, or a combination of the two. This process is followed by an assessment of how well their chosen coping method is working and encourages them to reevaluate if needed. This program is made possible through the Jordan Porco Foundation and the Benny Fund.